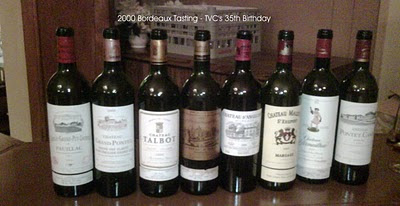 Here are the rankings for the 2000 Bordeaux we tasted on September 21. Both the group and our speaker, Ian Hanna of John Hanna & Sons wine agency, rated the d'Armailhac highly but they differed on the least favoured wine. However, there wasn't a 'bad' wine in the group. It was just what people preferred. 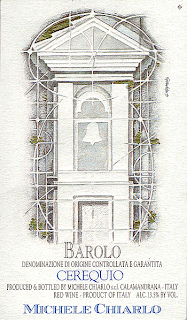 Next month’s tasting is of the 1996 vintage - one of five greatest vintages of Barolo in the past 20 years and with 14 yr of aging, these wines should be drinking well. You are encouraged to register early as tickets are limited!

Email ThisBlogThis!Share to TwitterShare to FacebookShare to Pinterest
Labels: 1996, Barolo

We had a large turnout for our 2000 Bordeaux tasting on September 21.  By all accounts, everyone enjoyed the wines (rankings will be updated on our website and Blog very soon) and the speaker, Ian Hanna, educated and entertained us with some very interesting, amusing and personal tales of some of his visits to Bordeaux as well as giving us tips on what to look for in these wines and sharing his comments on each wine.   A tribute was paid to founding member, Ted Turner, who passed away on September 11.  Long-time, former member Bob Moore, pointed out that virtually every other wine club was started by someone who was once a member of TVC in its early days.  A memorial service for Ted will be held at St Mark's Church in Niagara-on-the- Lake next spring TBA. Donations in Ted’s memory to 'The Leukemia and Lymphoma Society of Canada' or Canadian Blood Services would be appreciated.

Because it was TVC’s 35th birthday, we gave away some lovely prizes!  Our guest speaker drew the first name out of the bag  -  and it was his own name! However, he graciously drew another prize winner instead:  a bottle of 2004 Ch. Beauregard (Bordeaux) went to Harry Xanthis.  John Macdonald, David Gotfrid and Stephen Tobe were the other lucky door prize winners of some lovely wine paraphernalia.  All were TVC members.

The reception wine, supplied by John Hanna and Sons Ltd., was a Spanish red wine, 2008 Bodegas Cataňo Hécula Monestrell available from Vintages (Product # 718999) for a mere $13.95! It was outstanding and great value for money!
No comments:

May he drink with the Gods and dance with the angels. May he shine through the universe like he shone through life. His spirit burns bright with magnificent colours. He lived. He loved. He made a difference. Thank-you Ted.

Born May 12, 1932 in Toronto, Ontario. Passed away in Guadalajara Mexico on September 11, 2010 from kidney failure.  All who knew Ted could not help but be impressed by his intelligence, humour, and kindness. He was delightful, charming company, loved and respected by many in his chosen retirement towns of Niagara-on-the-Lake, Ontario and Manzanillo, Mexico. Ted founded, and was the former President/CEO of Hunt Personnel/ Temporarily Yours (1967-2001) He delighted in being, at various times in his life, an entrepreneur, actor, artist, photographer, and musician. He adored good food, great wine and was an oenophile who started the Toronto Vintner's Club.

An excellent humourist, Ted became a regular on Lorne Michaels comedy sketch show 'The Hart and Lorne Terrific Hour' (70's) going on to host his own radio show 'Turning Point' on CFRB 1010 (80's). He was a lifelong learner who excelled at poker, snooker and bridge. Ted believed in giving back to the community, playing a jolly Santa Claus every year at the Manzanillo Children's Orphanage. He was also a board director for a number of prestigious organizations: The Canadian Stage Company, ABC Life Literacy Canada, Public Policy Forum, Royal Canadian Yacht Club, Baron de Forester Society. Employment Industry selected Ted as Man of the Year (1988). Toronto Wine named him 'Person of the Year' (1995). He was the Canadian Employers Council delegate to the International Labour Organization, United Nations, Geneva in 1996 and '97.

Ted was a mentor to many; a strong and loving man who will be sorely missed. He is survived by: his adoring wife of thirty years, M. Patricia Turner, daughter Loren Turner (Patrick Hunter), stepchildren Leslie (Herb Nelson), Joe, and Amy Fritz, and grandchildren Benjamin Hacking (Kim Proctor) and Michael Fritz- Jones.

Ticket sales for our fabulous 2000 Bordeaux have ended! If you didn't get in, you'll be missing out on tasting one of, if not THE, greatest vintage ever.  Sorry!  You'll just have to read about it on our Blog.
No comments:

We are saddened to learn this morning that Ted Turner, the founding member and driving force behind the Toronto Vintners Club for many years, died at his winter home in Mexico after a brief illness.  Our thoughts and sympathies go to his wife Trish, who attended many tastings with Ted, and to his family.  Ted was extremely affable and really well liked by all who met him.  He will be greatly missed.  Ted, we shall remember and raise a glass to  you on September 21st when the Club meets to drink 2000 Bordeaux at its 35th Birthday. 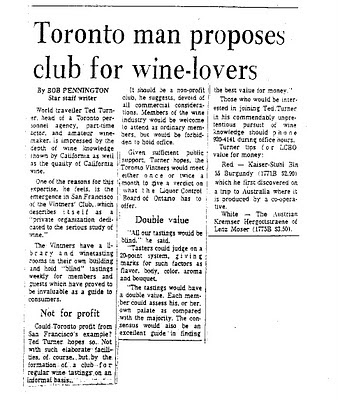 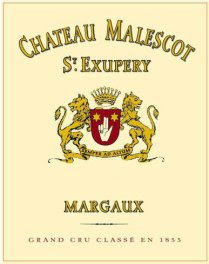 We celebrate TVC’s 35th Birthday on Sept. 21 by offering wines from what’s been hailed by Robert Parker as "the greatest vintage Bordeaux has ever produced". Our exceptional line-up of wines includes seven Bordeaux from Left Bank sub-regions of Margaux, Pauillac and St. Julien as well as one from St. Émilion on the Right Bank. We have three 5th growth Pauillacs: Grand Puy Lacoste, Grand-Pontet, D’Armailhac; one 5th growth St. Julien: Chat. Talbot; a Grand Cru Classé from St. Emilion: Grand-Pontet and three Margaux: Malescot St-Exupéry and D’Issan (both are 3rd growths) and D’Angludet. 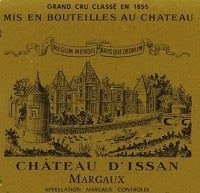 Because it’s our birthday, we are pricing this at only $60 for members. At this great price, however, we will NOT be serving appetizers so please eat something before you arrive at the tasting. Members have had an exclusive week to register first so many tickets have already been sold.

Anyone who wants to join TVC as a brand new member between now and December 2010 will be paid up until December 2011 and can attend at the reduced membership rate.  Here are the key highlights and links for our September tasting: