You say Shiraz and I say Syrah.  In France this grape is known and grown as Syrah, and responsible for some of the Northern Rhone's big, bold red wines. Down Under in Australia and South Africa it goes by name "Shiraz and is responsible for producing outstanding, delicious red wines. 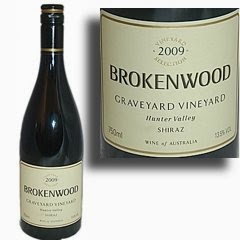 The success and recognition of Australian Shiraz started long ago with a Shiraz from Victoria competing in the 1878 Paris Exhibition being likened to Château Margaux and "its taste completed its trinity of perfection." And the vintage of 1971 won first prize in Syrah/Shiraz at the Wine Olympics in Paris. Shiraz or Syrah?  It's actually the same grape.  We sample 8 wines from the 2001 to 2008 vintages from some very notable wineries including Brokenwood, Leeuwin Estate, Alkoomi, Rockfort Wines and others from most of the major wine producing regions in that great continent known as OZ.  Our vintages range from 2001 to 2008.