It's fitting that we ended the 2011 tasting calendar with dessert wines.  It was a sweet way to end a year of great tastings and turnouts and welcome in the holiday season.

The tasting was a little more difficult than usual, as there was a wide array of different styles on display.  There were ice wines, where the grapes are left on the vines to freeze, which concentrates the juice.  We also tasted wines affected by Noble rot, in which a fungus (Botrytis cinerea) attacks ripe grapes and causes an increase in their sugar content and produces deeper and richer golden colour in the wines than usual.  Finally, we also tasted a fortified wine in which an alcohol is added to the wine to halt fermentation, which leaves more residual sugar in the wine.

Our speaker on the night was our own Larry  Goldstein, who has not only been a member since the founding of the club in 1977, but is also wine of the wine buyers for the club. 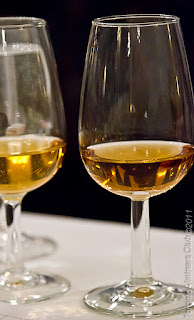 The number of different styles of wine present at the tasting made for an interesting time ranking them.  The group was able to come together and pick a top wine, which was the 2004 Dr. Loosen Wehlener Sonnenuhr Riesling Beerenausles.  Larry said that he found this wine to have a slightly closed and underdeveloped nose, but had a rich concentrated long taste and had one of the best balances between sweetness and acidity.  He went on to say that this wine could (and should) be cellered for another 10 years, and ranked it as his #3 wine.  Larry's top wine of the night was the 1996 Château Guiraud, 1er Cru, which he said was an absolute classic, that was unmistakable in character and was drinking at it's absolute peak right now.  The group didn't quite agree and ranked it as their #6 wine.

The sole Canadian wine if the group, the 2007 Inniskillin Vidal Icewine, had a great showing and proved that it could easily compete with much more expensive dessert wines from around the world.  The group ranked it the #3 wine of the night 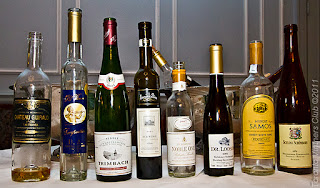