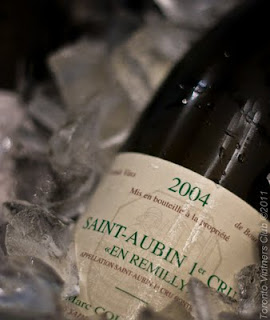 We were privileged to welcome Sébastien Jacquey as the guest speaker for the evening.  Sébastien comes from the Nevers region of Burgundy. His extensive educational and practical experiences have led him throughout France to many of the most prestigious schools and châteaux including training at Baron Philippe de Rothschild in Pauillac. Sébastien is a Master of Earth and Environment, specializing in Vine Management and Terroir; and an Engineer of Oenology and Viticulture.

Sébastien first spoke to the group about the quality of the 2004 vintage in Burgundy.  Sadly, the 2004 was not one best vintages for the region and started out almost as poorly as the drought filled 2003 season.  Heavy rain in August brought some disease and infection to the vines of the region, but luckily, September was "blessed by the gods" and dried out many of the vineyards.

He also talked about how two very different style would be present in the wines we tasted that night.   Some of the wines, like the Jean Boillot, are very "old school", where as wines like the Domaine LeFlaive and the St. Aubin, were much more of a new generation style.  They use much less oak and try to focus more on letting the terroir come through.

This turned out to be one of more challenging tastings we put on, as the group struggled to come up with a consensus for everything but their top and bottom ranked wines.  The two top wines of the night were the Jean Boillot (Sébastien top pick and the groups 4th) and Marc Colin, St Aubin (The groups top pick and Sébastien's 5th)

When speaking about the Jean Boillot, Sébastien described it as having an intense/complex nose that was full of ripe stone fruit scents.  It was very creamy and fat with flavours of mushroom and limestone minerality.  It showed a fantastic balance between the fruit and minerality with a long, smooth and tight finish.  However he did say that it wasn't a typical Burgundy, and that it tasted almost new world.

The St. Aubin, according to Sébastien, had lots of ripe stone fruit and ripe flower flavours and also some intense citrus notes.  It had good structure with a medium long finish.  He did say that when tasting, that he was searching for a minerality that seemed to be lacking.

Reminder - White Burgundies on May 17 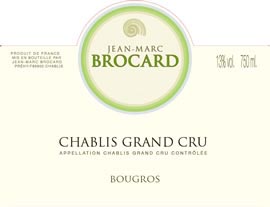 Just a few days left to register for our fabulous white Burgundy tasting on May 17! We'll be drinking wines from Meursault, Puligny-Montrachet, Chablis and St. Aubin communes and from some of the greatest producers in the region. Price includes appetizers and a reception wine. 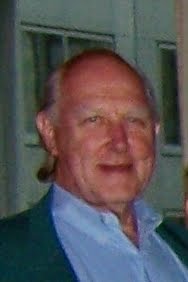 1932 - 2010
In Memoriam
Edward Giles Turner
A memorial service in honour of TVC’s founder and long-time president, Ted Turner's life will be held at St. Mark's Anglican Church, 41 Byron Street Niagara-on-the-Lake ON, L0S 1J0 on Saturday, May 14 at 11:00 AM.  Reception to follow at Addison Hall (located on the grounds of St. Mark's Church).

"May he drink with the gods and dance with the angels. May he shine through the universe like he shone through life. His spirit burns bright with magnificent colours.  He lived. He loved. He made a difference."  Thank-you Ted.

From Toronto and destinations E/W via QEW:

Follow the QEW towards Niagara.  After crossing the Garden City Skyway at St. Catharines - exit the QEW at exit 38B, follow the Niagara-on-the-Lake signage onto Highway 55. Take Hw 55 12km (7mi) northeast until it ends at Queen Street. Turn R onto Queen St. (main street of NOTL).  Turn L just after the clock tower & proceed to the first Right (St. Mark's will be on your right).
No comments: