This past Tuesday, the club was lucky enough to have the opportunity to taste some 2003 Left Bank Bordeaux's.  Those of us that were able to make it out to the even, were not disappointed by some of the outstanding wines available this evening.

2003 was an atypical season, marked by heatwaves throughout Europe but with late rainfall that helped to save a lot of the harvest, especially the cabernet sauvignon.  This lead to the wines having higher than normal tannin levels and much more of a new world flavour. 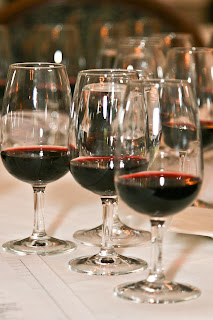 The highest ranked wine for the night, with a unanimous decision, was the Leoville Barton, 2e, St. Julien (which was also the most expensive, coming in at $109 a bottle at the time of purchase).  It was described a having a very spicy and smokey aroma, a nice inky purple colour, and perfectly balanced tannins and acid levels. 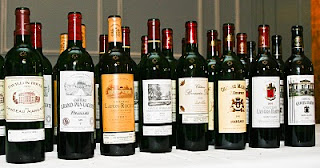 The wines were really wonderful!!