A wise wine merchant once made the comment - "The first duty of every wine is to be red.  The second is to be from Burgundy."  One of the great charms of Burgundy is that it is so different year to year.  This past Tuesday, (February 21, 2012) we got the opportunity to taste some great Burgundy's from a very different Burgundy and from one of the most unusual years in recorded history.

Our speaker for the evening was Peter Wearing, who co-founded The Small Winemakers Collection, a wine agency, in 1991. Today he is managing director of the company that employs 15 people and is one of the largest agencies in the province.

Peter started off the evening by speaking about why the 2003 vintage was so unique.  2003 was plagued by heat waves all over Europe.  Temperatures were on average, 6 degrees higher than normal.  A 4 degree difference is very unusual, but 6 degrees was previously unheard of.  This increase in temperature lead to the earliest harvest on record, which started on August 20th, which was a full 4-6 weeks earlier than the earliest ever recorded harvest date (depending on the location in burgundy).  This high heat caused the grapes to contain high amounts of sugar.

Many producers thought that the 2003 vintage would be a write-off, but at some point during the fermentation, magic happened.  The acids increased, and the tannins from the thicker grape skins helped to round everything out. 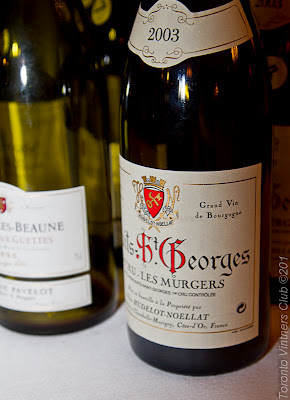 All the wines that we tasted, were great examples of what skilled winemakers were able to produce in much less than ideal conditions.  All the wines were great with not a bad one in the bunch.

Peter's number one wine of the evening was the 2003 Rossignol-Trapet - Latricieres-Chambertin $109. He said that this was an elegant Burgundy, with a great woody nose.  The acids and tannins were beautifully integrated along with great fruit and woody flavours.  The group agreed with Peter as they ranked this as their second favourite.

The groups favourite wine, which was ranked first by one of the largest margins we have ever seen in a tasting, was the 2003 V Lignier - Morey St Denis, Les Faconnieres, 1er cru $84.  It had great dried fruit flavours of plum and cherry, along with subtle hints of leather and tobacco.  Peter didn't quite agree with the rest of us, and ranked this wine 6th, mainly due to what he said was a lack of that typical Burgundy complexity.